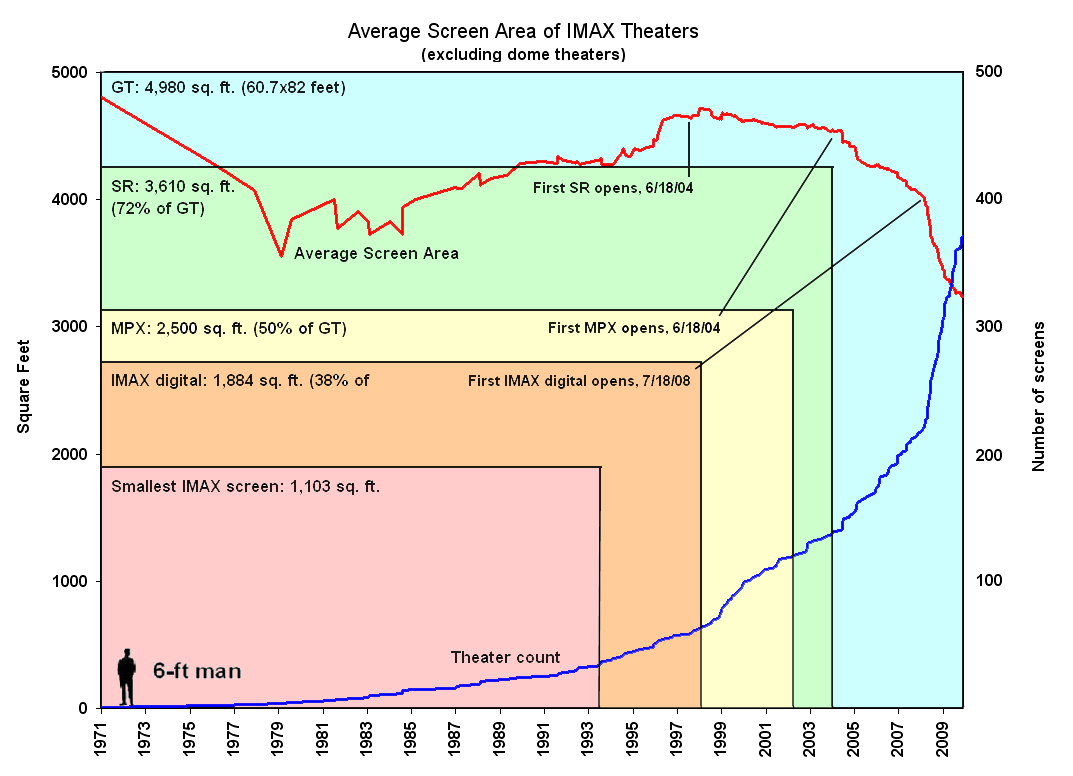 Originally published in the April 2010 issue.

In September 2008, Imax Corporation CEO Richard Gelfond told the Giant Screen Cinema Association, “We don’t think of [IMAX] as the giant screen,” and the company has been working to reinforce that position ever since. A few months earlier, the company had launched its first digital IMAX theaters in retrofitted 35mm multiplex auditoriums.

Today there are 162 IMAX digital theaters, with more opening every month. Since most digital projection systems are installed in existing auditoriums, their screens are much smaller than those of purpose-built IMAX theaters with 15/70 film projectors.

Over its forty years in business, Imax has developed four basic projector models:

GT: Introduced in 1970. The original, large rolling-loop projector, about the size of a compact car. The largest systems use a 15,000-watt, water-cooled lamp. The only system used in IMAX Dome theaters. It is also available in a dual-rotor 3D version. Installed base: 191.

SR: Introduced in January 1998. The first compact system intended to lower hardware and construction costs for multiplex customers, relative to the GT. Consists of two small-rotor projectors that can project 3D or be used in changeover mode to run longer films. Installed in slightly smaller, but still custom-built, auditoriums with screens up to 55×75 feet (17×23 meters). Installed base: 54.

MPX: Introduced in June 2004. Designed specifically to be retrofitted into multiplex theaters, and as a placeholder for the digital system then in development, it has two small rotors and fits in the footprint of a standard 35mm projector. Many MPXes have been converted to digital, and most of the remaining ones will probably be converted in the next year or two. It is intended for screens up to 70 feet wide and has a 1.8 aspect ratio. Installed base: 31.

Digital: Introduced in July 2008. Two Christie CP2000SB projectors, with an IMAX-designed operator interface and a proprietary “image enhancement engine.” Usually installed in existing 35mm auditoriums. It is intended for screens up to 70 feet wide and has a 1.9 aspect ratio. Installed base: 162.

The largest GT theater has a screen 96 feet wide and 117 feet tall (29×36 meters). On average, GT screens are 60×80 feet (18×24 meters), but with the introduction of the subsequent models, the average screen size began to shrink. This chart illustrates that process.

The red curve at the top of the chart represents the running average screen size of all IMAX theaters over the years, excluding dome screens. The blue curve at the bottom shows the number of theaters open over time. (Its scale is on the right, and is one tenth of the value of the area scale on the left.)

Through the late 1980s and 1990s, average screen sizes grew steadily. The SR systems, with screens around 75% the size of GT screens, lowered the average only slightly in the first decade of the 21st century. But the introduction of the MPX in 2004 began a more rapid expansion of IMAX theaters into multiplexes and a concomitant decrease in the average area. That drop accelerated significantly with the launch of the IMAX digital system in the summer of 2008.

The average IMAX digital screen has an area of 1,884 feet, less than 40% that of the average GT screen.

The largest digital IMAX screens are in two purpose-built theaters originally equipped with MPX systems, the RC Reading Movies 11 & IMAX in Reading, PA, and the Kerasotes ShowPlace 16 in Indianapolis, IN. Both have screens 42×70 feet (13×21 meters), the nominal maximum for MPX and digital IMAX projectors.

About our data
During Imax Corporation’s first three decades, it regularly published lists of all its theaters with details such as projector type, screen size, and number of seats. The data for most of the GT, SR, and MPX theater represented on this chart are taken from those official lists.

However, since 2007, no such lists have been available, and Imax and its two largest joint-venture partners, Regal Entertainment Group and AMC Entertainment, have declined repeated requests from LF Examiner and the Giant Screen Cinema Association to provide screen sizes for their IMAX digital theaters. Therefore, our figures for the average size of a digital screen are based on press reports in a few cases, as well as measurements we have personally made with an accurate laser rangefinder in 39 digital theaters in ten states. We believe that averaging nearly one quarter of the extant digital IMAX screens provides an accurate representation of all of them.