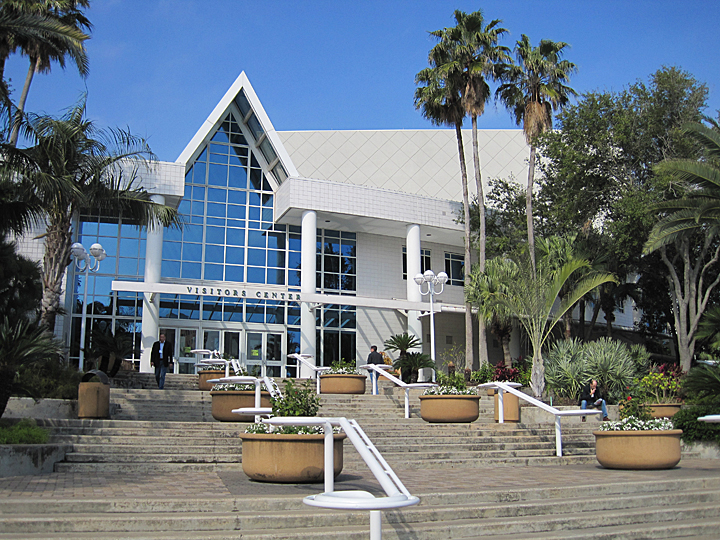 Originally published in the February 2012 issue.

More than 260 people attended the second Digital Cinema Symposium held at Moody Gardens in Galveston, TX, Jan. 9-10. Crowded into the two days were a panel discussion on the business of digital 3D in museums, screenings of new films in 3D 4K digital, presentations from several server manufacturers, demonstrations of new audio technology and high-frame-rate material, and a repeat of the 15/70 vs. 4K shootout held at last year’s symposium (see here). The two highlights of the meeting were the first public demonstration of a prototype laser-powered 4K digital projector by Barco, and the keynote speech by pioneering filmmaker Douglas Trumbull.

The meeting was sponsored by Barco, Moody Gardens, and D3D Cinema, a theater system integration company that has a business relationship with Barco.

This year’s shootout was similar in many respects to the one held in Galveston a year ago: footage from several different sources, including 15/70 prints from original negatives, prints from interpositive/internegative, and from digital intermediate, were projected on the theater’s 15 kW IMAX GT projector, side by side in a split screen with the same footage projected by a Barco 4K DLP projector. The digital image was flipped horizontally so that the same half-image appeared on both sides of the screen, for easier comparison. The film and digital prints were calibrated for the light output of their respective projectors, so that even though the IMAX image had a nominal reflectance of 22 foot-Lamberts and the digital projector was at industry standard of 16 fL, both images appeared to be of approximately equal brightness. Much of the same footage used last year was used again this year, with a few minor variations.

The major difference was that, unlike last year, when the 1.9-aspect-ratio digital image was set to fill the width, not the height, of Moody’s 60×80-foot (18.3×24.4-meter) screen, this year a wide-angle lens was used on the Barco projector to overshoot the width, and fill the height of the screen with a “pillar-boxed” 1.33 image.

As was the case last year, RPG Productions‘ Rick Gordon commented on the differences between the images, noting what he perceived as the pros and cons of each: deeper blacks here, better resolution there. The reel was run twice. At the end, Barco’s Andrew Gaweda asked the audience of about 150 people “Who liked digital?” Nearly all hands went up. When the audience was asked “Who liked film better?” only three people raised their hands (that this reporter noticed): filmmaker Greg MacGillivray, his son, Shaun MacGillivray, and Dave Duszynski of the Cincinnati Museum Center.

The demonstration of Barco’s prototype laser-powered projector was not held in the giant-screen theater, but in a large ballroom of the Moody Gardens Conference Center.

The advantages of laser light sources over conventional xenon lamps for digital projection are numerous: higher contrast and wider color gamut, lower energy use, and greater light output. The last is particularly important for giant screens and 3D applications, where polarizing filters can reduce light reaching the viewers’ eyes by as much as 80%.

On a screen about 25 feet (7.6 meters) tall by about 70 feet (21.3 meters) wide, the massive machine about the size of a large office desk projected extremely bright 2D 4K images from a variety of sources. (The screen height was limited by the size of the room, and because the screen was a non-standard shape, the images were cut off somewhat on the top and bottom.)

The Barco reps emphasized that the projector was a proof-of-concept device that would not be available for sale in its present form. The system used multiple lasers totaling 600 watts to provide 55,000 ANSI lumens of light output. (ANSI lumens ratings average light across the entire screen, not just at the center, as many stats give.) Despite the relatively low wattage of the lasers, the entire projection system, with cooling and other systems, draws thousands of watts. The throw from projector to screen was 100 feet (30.5 meters), and reflectance from the Harkness unity-gain screen was 23fL.

Most participants LFX spoke to were very impressed with the clarity and brightness of the images. The only flaws noticed were heat waves in bright areas of the image, which Barco reps blamed on the air handling in the hall, and laser speckling that a few people observed in green or blue areas of some images. (Speckling, random variations in the intensity of light reflected from small spots, is the result of interference of multiple waves of light at the same frequency. It is most noticeable in blues and greens, and is one of the chief technical challenges manufacturers must overcome to make laser light sources practical for digital projection.)

About a month after the symposium, Barco and Imax Corporation announced a deal to jointly develop the next generation of IMAX digital projector, using Barco’s laser technologies and patents Imax recently acquired from Kodak.

Trumbull is the cinema innovator behind the special effects in 2001: A Space Odyssey, Close Encounters of the Third Kind, Blade Runner, and many other films, and the inventor of the Showscan process. In his talk, illustrated with many photos, he recalled that when he was just out of college, an illustrator interested in science fiction, his portfolio was filled with pictures of “space ships and alien worlds.” His work at Graphic Films in the 1960s caught the eye of director Stanley Kubrick, who hired him for 2001.

Crediting Kubrick for teaching him a lot about storytelling technique, particularly how to make films experiential, Trumbull said that giant curved screens and 70mm film made films like 2001 completely different from conventional movies. But by the 1970s, multiplexes and their smaller screens were becoming more popular. Furthermore, studios weren’t interested in developing new technologies that might enhance the cinema experience.

So Trumbull set up his own company, Future General, and in nine months had developed the Showscan system. He experimented with numerous sizes and shapes of screen, and measured the physiological responses of viewers to different frame rates to determine which had the most stimulating effect. In this way he settled on 5/70 film at 60 fps, single shutter, projected on a floor-to-ceiling screen, as the most effective configuration.

Trumbull hoped to use the format for certain key scenes in his feature Brainstorm, but exhibitors balked at installing special projectors for a single film, and the accidental death of star Natalie Wood while the film was in post-production set the project back further. Ultimately, Trumbull became so disillusioned with the studio system that he left Hollywood for western Massachusetts, where he began working on motion simulation systems.

At about this time he joined Imax Corporation, briefly serving as president of its Ridefilm division in 1994.

Trumbull is currently working on a new system he calls Showscan Digital, which uses high-res 3D cameras at 120 fps. Footage captured at this rate can be processed to be played back at 60, 30, or 24 fps, depending on the display device. He describes and demonstrates the process in a video here.

Callies outlined the comparative costs of the IMAX GT film system and the 4K digital system:

In addition, electrical costs for the digital system are about one quarter those of the IMAX projector, with its 15,000-watt lamp and water chillers, and the heavier air conditioning load. Staffing costs have also been cut, since the digital system is much simpler to operate: “As long as the films have been built in the computer system, it’s a matter of pushing a button to start it, opening the dowsers on the projectors, and you’re good to go,” Callies said. Without the need to rewind prints, shows can be scheduled more frequently.

In response to a question about the upper limit on light output from a laser projector, Barco’s Hoddick explained that a key factor in designing laser-illuminated projectors was managing the heat load on the DLP chips. The current prototype did not push the limits of light output, he said, and future test systems may be even brighter. Asked about the timing and cost of a laser projector, Hoddick said, “the cost of laser [-powered projection] is too high. It doesn’t make sense right now. Do we believe the cost of lasers will come down? Absolutely.” As for timing, government regulations that treat these systems the same as old-style laser light shows, which had the potential of damaging viewers’ eyes, could delay the introduction of laser projectors, even though the light coming from their lenses is no more dangerous than that of xenon-powered units. Several companies have formed a trade organization to urge governments to modify rules to allow these systems to be installed without the onerous restrictions put on laser shows. He expects the technology to be ready in 2013, although regulatory issues could delay it. He also affirmed that the company’s priority was to make it possible for customers with existing xenon-powered projectors to retrofit them with laser light sources.

Kempf predicted that digital capture would increase the quality of films, while reducing costs and shortening the production process. He expects digital production budgets to be 30-35% lower than equivalent film budgets, although with a larger market available to them, he believes digital budgets will rise to enhance their production values. The market for giant-screen museum theaters is about 150, but if the films can be shown in digital museum theaters, the market could expand to 450-500.

Lutz said that Imax is working on a “brand refresh” campaign that will roll out later this year, but added in response to questions that it will not make any effort to differentiate between the company’s film and digital systems. He claimed that in a study of 8,000 people in eight countries, “97% of the people surveyed said that they were satisfied with their IMAX experience.” On the same scale, he said, Apple Computers scored 72%. The next-gen IMAX digital system, with a 1.33 aspect ratio, will probably be available for giant flat-screen theaters in 2013, Lutz said, and for domes in 2014. He added that the company is also working on improving its communications with customers, particularly from theaters to the upper levels of Imax’s corporate structure.

Katz said that the demise of film is inevitable, “it’s just a matter of when,” even though some film theaters may continue operating for years to come. He pointed out that switching to digital projection, and the elimination of print fees, allows both theaters and distributors to earn significantly more, even while increasing local marketing efforts. National Geographic is helping museums expand the market by making deals to brand their theaters with the National Geographic name.

Mensforth warned that some of the savings achieved by switching to digital must be reserved for increasing local film marketing, which tends to be cut in tough economic times. Kempf agreed, pointing out that the savings that Callies had described earlier did not include the elimination of the IMAX system lease (Moody owns its IMAX projector) or other savings that can be applied to marketing.