From A Dream to the Giant Screen: In Saturn’s Rings 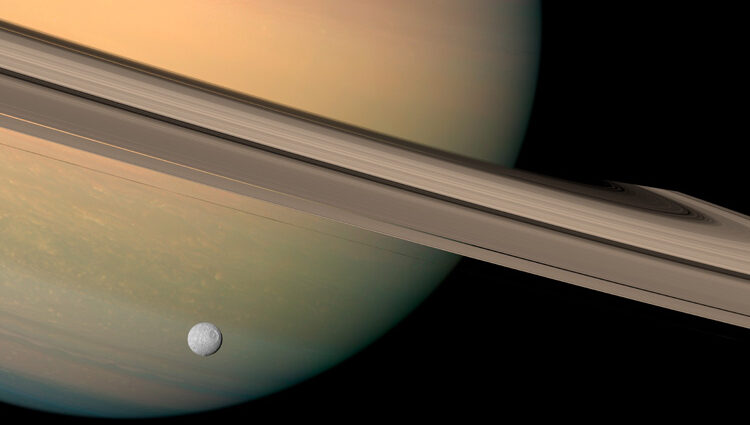 Originally published in the December 2013 issue.

Eight years ago, after seeing the first pictures from the Cassini spacecraft’s arrival at Saturn, I dreamed of what it would be like to have a motion picture camera flying through space, capturing the most amazing footage in the history of movies.

That dream is becoming reality through the immersive power of the giant screen and photographic animation techniques that took eight years to develop. Audiences will fly through space, from the Big Bang to the breathtaking ring world of Saturn, when In Saturn’s Rings (formerly Outside In) is released in 2014 in 15/70mm, true 1.33-ratio 4K digital, and native 4K fulldome. We are pleased to announce that In Saturn’s Rings has signed a distribution agreement with BIG & Digital for world-wide release.

In Saturn’s Rings began after I noticed the dearth of media coverage surrounding Cassini’s arrival at Saturn in June 2004. It was not aired live on any TV channel at all. In response, I wrote a one-act play about the debate of exploring space. A few months later, dissatisfied with the result, I wrote a script for a short art film that combined the play with still images from space missions, notably Cassini. I filmed two versions, with several script rewrites in between, but never released them, as they failed to capture the scope of space exploration.

Then one day in early 2006, while listening to a version of Adagio for Strings by Samuel Barber, I imagined creating moving images of Saturn using animation techniques I had seen in the documentary The Kid Stays in the Picture. I spent many long months struggling with these techniques until finally I had a breakthrough with a black-and-white HD resolution animation. At that point, I wrote a script for 12-minute narrated film for planetariums and film festivals.

Everything changed when I had a chance meeting with LF Examiner’s editor, James Hyder, at a conference in Las Vegas . Upon learning of my film plans, he simply said, “This film should be on the giant screen.” Of course, I told him it was impossible. But the next day I went to see Imax Corporation’s Magnificent Desolation at the Luxor IMAX Theater. I instantly knew James was right: this film had to be on the giant screen.

It took several years, my life savings, breakthroughs in software and desktop computing technology, but finally, I was able to make it work beyond my wildest expectations. During that period, I wrote and rewrote the script. In 2009, after my annual viewing of Stanley Kubrick’s 2001: A Space Odyssey, the film that inspired me to become a filmmaker, I pinpointed what had never worked in earlier versions of my scripts. There are only 11 minutes of dialogue in 2001’s 140 minutes. I realized what Kubrick and writer Arthur C. Clarke understood: space is universal, primal, infinite. Words simply fail to convey the experience of exploring space.

I had titled the original one-act play Outside In, a phrase that was explained in the dialogue, and I kept that title when it became a film project. To bring new audiences and new interest to space exploration, I saw that the film would have to inspire feelings, thoughts, and questions that arise when we have a powerful experience along life’s journey. I eventually came to see that the title would have to be changed. That sense was confirmed by GSCA screening surveys that showed that theaters found the name confusing.

The story of the film is a simple, direct narrative. In Saturn’s Rings is a literal journey from the Big Bang of the universe’s creation, to a climactic fly-through of Saturn’s system, where, in Saturn’s rings, we find the most incredible of Cassini’s photographs — a small fuzzy blue dot — our home planet Earth.

It took me some time to come up with a name that was true to the film and met legal and other requirements. One day the title just fell out of my mouth when I was explaining the climax of the film, that same famous Cassini photograph of Saturn backlit by the Sun that has “Earth in Saturn’s Rings.” I’ve always been a fan of titles that reveal their true meaning at the climax of the film, and I knew that was it.

How it was made

In Saturn’s Rings is composed entirely of more than a million photographs from space and historical sources, animated to full-motion without CGI, 3D modeling, or simulations. The images are all real, and create a powerful emotional response that is clearly evident when viewed by audiences. Many of the photographs used in the film, from Cassini images buried on obscure web servers to long-lost Apollo high-resolution aerial scans, were extremely hard to find and have been seen by only a very few people on planet Earth.

While the basic techniques used in the film were developed from the 2.5D animations used in The Kid Stays in the Picture, I soon found those technique failed with Saturn’s rings. I also wanted to take the motion much further, well beyond a simple zoom and scale, to give a true sense of flying. So I spent countless hours researching and experimenting with various old methods, drawing on everything from perspective optical illusions used in theater and architecture to moving 2D flats from pre-CGI cinema days. I also studied the famous “Bullet-time” effect from The Matrix films, which uses a large array of still cameras arranged around a subject and fired off in quick succession.

Eventually I was able to develop a toolbox of techniques to cover all the scenarios that I would encounter in a “flying through space” film, without having to resort to computer-generated pixels. This way, the film would be 100% photographs. In some scenes a single photograph is used per frame, but many frames are giant collages of thousands of photographs seamlessly arranged, then animated to create the feeling of flying. Theoretically, every shot in the film could have been done without a computer. Given a large enough room, a motion-controlled still camera rig, and hundreds of thousands of printed photographs, all on their own motion-controlled rigs, the film could have been shot entirely in-camera. Of course, there are probably not enough motion-control rigs in the whole world, and computers made it much simpler.

By keeping to a simple, narration-free journey, the film will give audiences the experience of being an astronaut, as they take a journey that will feel real because it uses only real images. The film taps into the deepest part of man’s longing to fly, to explore, to discover things never seen before. In Saturn’s Rings also transcends boundaries, touching audiences of all backgrounds, ages, and geographic locations.

This was demonstrated shortly after I posted the first minute of footage on the Web in 2010. In early 2011, the clip went viral, generating millions of plays in hundreds of media outlets around the world, and garnering praise from major media and scientific celebrities like Bill Nye, host of PBS’s Bill Nye, The Science Guy.

The exposure has led to an incredible number of passionate and dedicated volunteers, including college astronomy departments and scientists, who are now contributing hundreds and thousands of hours of labor to the film. This has allowed its scope to be expanded dramatically. Over 35 leading amateur space image processors have donated their images to the film, many representing hundreds of hours of work.

One of these is Colin Legg, a talented time-lapse astrophotographer from Australia, who shot a 12-day and 12-night time-lapse sequence of the dark night sky for the film, using a five-camera rig he built to create a one-of-a-kind, high-resolution sequence. Also in Australia , Adam Kil, by day a satellite image processor, spent months compiling image strips from the Lunar Reconnaissance Orbiter, many not yet fully processed by NASA.

Nearer to me, the astronomy department of Guilford Technical Community College in Jamestown , NC , has taken charge of mapping a huge amount of Hubble photographic data for use in the film’s Big Bang sequence. Three more volunteers — a filmmaker from Maryland , a solar researcher from Greece , and a computer programmer from North Carolina — are helping out as well.

Work is roughly two-thirds complete and is proceeding well. My goal is to finish the film in December 2013 with an industry premiere in spring 2014. The first official teaser trailer will premiere at the Giant Screen Cinema Association’s Film Expo in March 2013, where I also hope to show some extended footage. At GSCA’s annual conference in Ottawa in September, I will show several sections of the film in rough-cut form, as well as an updated trailer.

While the core funding to finish the digital master is fully in place, I plan to start another round of crowd-sourced funding for some wish-list items, including a full orchestral recording of the score and select music licenses.

Versions for all theaters

In Saturn’s Rings is being created in four formats, each of which will be available in 45– and 20–minute versions:

While this takes longer, it insures that each and every viewer will have the best possible experience of the film.

For the institutional giant-screen theater, In Saturn’s Rings will do what GS films do well: provoke a profound emotional response and leave audience members full of questions when the credits end and the lights come on. Science centers, planetariums, and learning institutions are the perfect venues for audiences to learn more, ask more questions, and ultimately become passionately involved with space exploration.

Internet interest in In Saturn’s Rings has been extremely strong and will only grow as the first teaser trailer is released in December. The film already has a very large social-media audience, many of whom have supported it through non-profit donations.

The support of passionate fans is why I’m so optimistic about the future of In Saturn’s Rings. To me, it’s the ultimate giant-screen film I want to see. And now I know that my own personal passion is being shared by millions around the world. Together our dream is becoming reality.

Stephen van Vuuren is an award-winning filmmaker, musician, photographer and ubergeek. He grew up in Johannesburg , South Africa and Knoxville , Tennessee . His father purchased him a manual 35mm camera when he was 12 and his love of image-making began.