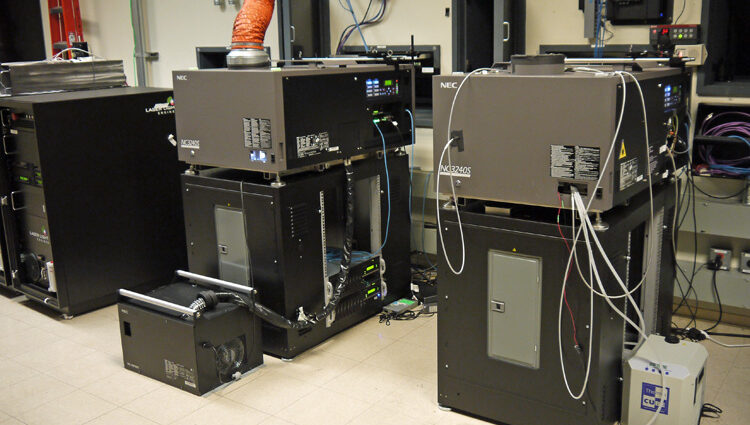 Originally posted in the December 2013 issue.

The promise of lasers

As the transition from film to digital projection continues for conventional and giant-screen theaters alike, the next advance in projection technology, particularly for giant screens and the larger conventional theaters, will be replacing xenon arc lamps with laser light sources. Laser-powered systems offer the potential of much greater light output — particularly important for 3D projection — with higher contrast and a wider color gamut than xenon projectors can provide, while using less electrical power and generating less waste heat. Laser light can be transmitted via fiber optic cable, allowing the light source to be placed outside the projector. This offers the possibility (in future systems) of making projector heads small and quiet enough to be mounted inside auditoriums, eliminating the need for separate projection booths. In multiplexes, racks of lasers could be located in a central “laser farm” with a single cooling system, and their light distributed to each theater through fibers connected to a patch panel. If a single laser failed, a spare module could be patched in to replace it in minutes.

Adding to their inherent efficiency, lasers have longer lives, and offer more stable light output over that lifespan, than xenon lamps, which lose about half their brightness over time. On the down side, lasers are currently relatively expensive, although the cost of individual laser modules is expected to drop as more are produced.

All laser-illuminated projectors being developed now use multiple lasers per color, with the light output — and system price — determined by the number and kind of lasers needed. More so than with xenon systems, which have a limited number of set power levels, most laser projectors will probably be installed with a set of lasers customized to each theater’s screen size and throw. Thus, the same basic projector installed in a very large auditorium might be significantly more expensive than one in a smaller theater.

Working with Netherlands-based projector maker Barco, and using patented technologies acquired from Kodak and other sources, including its own research, Imax Corporation is building its new laser system from the ground up. In contrast, LLE is, initially at least, providing light sources that will be retrofitted into standard digital cinema projectors. It is working with NEC, but the company says its systems will be available for all DLP digital cinema projectors as well as Sony’s 4K LCOS systems. Each approach — retrofitting or starting from scratch — has its pros and cons.

For instance, by starting with existing projectors, LLE’s system will be available sooner — orders taken now will be filled in six months — and at lower cost: customers may not have to buy a whole new projector, but will simply add laser light sources to their (compatible) existing digital systems. LLE has not given out pricing info, but as we reported last month, the company’s Rick Posch told the Giant Screen Cinema Association conference in September that he expected laser systems to add between $10 and $15 per lumen to the cost of the existing projector. Thus, a 60,000-lumen light source retrofit (without projector) might cost between $600,000 and $900,000.

In contrast, Imax’s new system, still being developed, will not be available until early 2015, and the price tag is expected to be over $1 million, plus royalty fees and a mandatory maintenance contract. In Imax’s system, the lasers will directly generate the red, green, and blue primary colors, and will maintain the lasers’ inherent polarization. This promises to be more efficient, potentially using less power and eliminating the light loss caused by polarizing filters. In LLE’s system, red, green, and blue lasers are mixed to create a white light that the projector head then splits apart into separate colors; the lasers have to provide more light to compensate for the light lost to polarizers, which remain necessary in a retrofitted projector. (LLE says it will eventually offer a dual-projector 3D system that, like the Infitec and Dolby 3D systems, will use six primaries — slightly different shades of red, green, and blue for each eye — instead of polarizers. This will eliminate the need for filters on the projector.)

Imax held half-day demos in its Santa Monica screening rooms in the first week of November. More than 40 invited GS clients attended on Wednesday, Nov. 6; dome clients in the morning and flat-screen operators in the afternoon. (Variety reported that a total of 250–300 people, including multiplex operators, Hollywood producers, and distributors, attended on other days that week.)

The laser demo consisted of about 15 minutes of clips, projected with the 2K Kodak prototype projector, and with the company’s new sound system. The demo highlighted contrast more than brightness, since the single Kodak unit does not put out as much light as the production system, with two 4K projectors, will. A split-screen demo compared the opening white-on-black title slide of MacGillivray Freeman Films’new release, Journey to the South Pacific, on a 15/70 film loop, side-by-side with the laser image, to show the laser’s deeper black. The group also saw all of Journey, but projected on a standard IMAX digital system. Imax reps did not provide technical details about the system, or say how the Kodak prototype they were showing differs from the next-gen system.

Attendees were also told about Imax’s plans to increase documentary production over the next few years, as outlined by VP Mike Lutz at the GSCA’s conference in Ottawa (see story on page 1.)

Imax declined LF Examiner’s request for an invitation, but several GS-industry participants (who preferred to remain anonymous) said they were impressed by the quality of the laser image, particularly its enhanced contrast range, which gave it a film-like quality. The 3D was very good, they said, and the new sound system “rocked,” according to one. Dome operators we heard from were not as impressed, since the relatively small flat screen didn’t offer much guidance on how the next-gen 4K system will look on giant domes.

A week later, Laser Light Engines held its demos in a Burbank screening room owned by Technicolor. (LFX was invited, and attended.) Two separate sessions, one for 2D and one for 3D, were repeated several times over the course of four days. Attendees included studio reps, cinematographers, projector makers, and exhibitors, including a few GS people. Attending the same sessions as LFX were former columnist Marty Shindler, Blaze Digital Cinema Works’ Paul Fraser, and David and Patricia Keighley of Imax Corporation. In all, more than 300 people attended LLE’s ten sessions over four days.

In the 2D demo, images from two identical NEC 4K projectors were first projected side-by-side onto a matte white screen, with one projector using a standard xenon lamp, and the other a retrofitted laser system. The footage was projected butterfly-style, so the right side was mirrored on the left. The trailer for Toy Story 3, clips from some GS films, and other footage were projected, followed by test patterns to show color balance, contrast, and resolution.

The images looked nearly identical, except for very slight differences in hue. Although some might have expected the company to show off the greater brightness capability of the laser system, LLE founder and EVP Bill Beck explained that their intent was first to show that laser projectors could be virtually indistinguishable from the current technology. He said they might show how much better they can look in a later demo.

On the matte white screen, laser’s most problematic artifact, speckle, was nearly imperceptible. Speckle is the shimmering effect one sees when a laser beam is shone on a surface. It is caused by interference patterns in the reflections of the laser’s coherent light. Makers of laser-illuminated projectors employ a number of techniques to reduce speckle, which is generally most visible in bright, evenly lit image areas. LLE showed that on matte screens it has essentially solved the problem, although Beck said he thought there was still room for improvement.

However, most 3D systems (including IMAX and RealD) require a silver screen, which maintains each eye’s distinct polarity of the light. Since speckle is caused by polarized light, it will naturally be more apparent when using a silver screen. This was the case in the LLE demo, but at its worst it was still very subtle. Speckle was more noticeable when seen side-by-side with the xenon image, but most viewers probably wouldn’t notice it unless it was pointed out to them, and even then it is not distracting.

LLE’s 3D demo used the laser projector as one eye and the xenon as the other. This enabled viewers to perceive that there was essentially no difference between the two images, since variations in brightness, contrast, or color would have altered the 3D effect. Although the very faint speckling made it possible to tell which eye was the laser, the uniformity of the image between the two was impressive. Beck says the company is continuing to work on the speckle problem on silver screens, and expects further improvements in the near future.

The future of lasers

As we have reported previously, Christie, Inc., the third maker (with Barco and NEC) of DLP digital cinema projectors, has demonstrated its laser system publicly (see LFX, April 2013), and has announced that the first permanent laser projector installation will occur early next year at the Cinerama Theater in Seattle (see Shorts, September 2013). Thus, all three DLP suppliers have staked a position in the laser race, and Laser Light Engines says it will provide systems for Sony’s LCOS projectors.

This means that GS and conventional theaters will have a wide range of options from which to choose as they consider laser systems. Although the largest screens will be the first to benefit from laser technology — there are more than 90 GS theaters with screens wider than 80 feet (24 meters) — if prices come down as expected, eventually most GS theaters may reap the advantages of laser illumination.