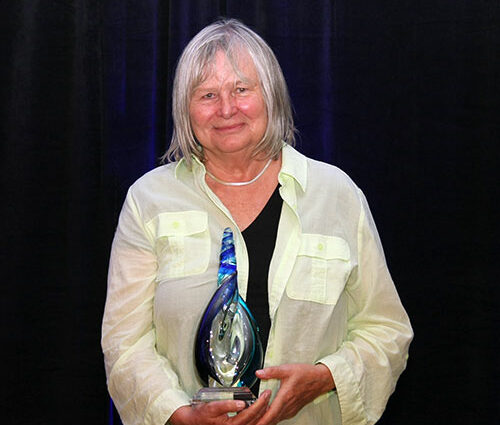 Toni Myers won the IMAX Hall of Fame Award in 2015 for Destiny in Space.

Originally published in the March 2019 issue.

Pioneering giant-screen filmmaker Toni Myers died at her home in Toronto, ON, Canada, on Feb. 18, at age 75. She had been diagnosed with late-stage cancer in October.

In a 55-year career that ranged literally from the depths of the ocean to outer space, she made some of the giant-screen industry’s most iconic and successful films, including Space Station 3D (2002), the highest grossing GS film ever, which she directed, produced, wrote, and edited. She contributed to at least 19 GS films, including eight space films that Imax Corporation made in cooperation with NASA, and received numerous awards and honors.

Antoinette Trow was born in Toronto on Sept. 29, 1943, and studied at the Ontario College of Art before starting work as an assistant editor on commercials, programs produced by the Canadian Broadcasting Corporation, and the 1964 Canadian feature film Nobody Waved Good-bye.

In 1965 she met fellow Canadian filmmaker Graeme Ferguson in New York, and worked with him on Polar Life, a ground-breaking multi-screen film Ferguson made for the “Man the Explorer” pavilion at Expo ’67 in Montreal. (Shortly after the Expo, Ferguson, Roman Kroitor, and Bill Shaw created the IMAX film format and formed the company, with Robert Kerr, that would become Imax Corporation.)

After the Expo, Myers moved to England where she worked on shows for the BBC and at the Beatles’ Apple Corps, editing films and videos for John Lennon and Yoko Ono. She also made a documentary feature commissioned by the band Santana.

In 1970 she returned to Canada to edit Ferguson’s North of Superior (1971), the signature film for Cinesphere, the world’s first permanent IMAX theater, at Ontario Place in Toronto. (Coincidentally, that theater screened A Beautiful Planet, Myers’ last film, free of charge on the day she died.) It was the start of 48 years working in giant-screen films, during which she would serve as editor, writer, producer, director, and, on two films, narrator.

In the early 1970s, with few new IMAX films being made, Myers continued working on non-GS projects such as editing the CBC series For the Record and NFB’s Stories from the North and South. She also worked with Canadian directors Gilles Carle, Francis Mankiewicz, and Claude Jutra, winning a prize for her work on Jutra’s CBC series Ada.

Back at Imax she edited Snow Job (1974), Ocean (1977), and Hail Columbia! (1982), the company’s first space film, although it included no footage actually shot in space. That would begin with The Dream Is Alive (1985), directed by Ferguson and written and edited by Myers. For that project, Ferguson and Myers took on the formidable challenges (technical, logistical, bureaucratic, and political) of getting the bulky IMAX 15/65 film cameras flown on the Space Shuttle and to the International Space Station.

Over the next 30 years, Myers, along with cinematographer James Neihouse and others on the IMAX Space team, would fly IMAX cameras on 24 Shuttle missions and seven other flights to the ISS, and teach more than 130 astronauts to be filmmakers and cinematographers. She directed them from the ground and turned the astounding footage they captured on orbit into seven of the most popular GS films ever made:

In a 2010 interview on National Public Radio, Myers said about teaching astronauts how to make movies, “That’s really easy because astronauts are really smart, and they wouldn’t be astronauts if they weren’t the best learners in the world.” At least three astronauts Myers trained — Tom Jones, Susan Helms, and Terry Virts — credit her early space films for inspiring them to become astronauts. Italian astronaut Samantha Cristoforetti posted on Twitter that “Her IMAX movies inspired generations, and inspired me as a teenager. Being part of her last movie, A Beautiful Planet, was an honor.”

Graeme Ferguson said, “The ability of Imax [Corporation] to go on being the filmmaker in space for 35 years, flight after flight, film after film, comes because of the confidence that the administrators of NASA and the astronauts have in Toni. That’s quite a talent.”

Myer’s other GS films include 1991’s Rolling Stones: At the Max, on which she was associate producer and supervising editor, and four underwater films: Ocean, Nomads of the Deep (1979), Deep Sea (2006), and Under the Sea (2009), the last two made with noted undersea filmmakers Howard and Michele Hall.

Myers and her films have won multiple awards and honors. More than half of the films she worked on received awards, with Deep Sea alonewinning six, including prizes from the Jackson Hole Wildlife Film Festival, La Géode Large Format Film Festival, and the Wildscreen International Wildlife and Environmental Film Festival.

Six of her films have been recognized by the Giant Screen Cinema Association (or its predecessor association) with a total of ten awards, including three for Best Film (Space Station, Deep Sea, Hubble) and four for Best Cinematography (those three plus Into the Deep). In addition, seven of Myers’ films have been inducted into Imax Corporation’s Hall of Fame, an honor bestowed on films that are at least ten years old, as voted on by the IMAX theater network. (Her three most recent films are not yet eligible.)

Myers herself was honored by NASA twice: in 2009 the astronauts of STS-125 presented her with the Silver Snoopy Award in recognition of her excellence and achievements in bringing the space experience to IMAX audiences around the world. And late last year a contingent of astronauts visited her in her home in Toronto to present her with NASA’s Exceptional Public Achievement Award, the agency’s highest form of recognition. She was the sixth person to receive that award.

Then on Feb. 11, a week before her death, Myers was personally presented with the insignia of Officer of the Order of Canada, the nation’s second-highest honor, by Julie Payette, the Governor General of Canada, herself a former astronaut. Myers had been nominated for the honor — a process that normally takes about a year — by a group of colleagues late last year. (Graeme Ferguson was appointed a Member of the Order of Canada in 1993.)

At its 2018 conference last September, the GSCA presented Myers with its Outstanding Achievement Award. In her nomination letter for the award, Kim Cavendish, retired CEO of the Museum of Discovery and Science in Fort Lauderdale, FL, wrote, “Speaking as former CEO of three museums with giant-screen theaters, I can say that the films she spearheaded have been among the very best, most popular, and highest attended of those that we featured through the years. Her films have consistently drawn large school group audiences to their educational messages, and have thrilled general audiences with their beauty and compelling narratives.”

At the ceremony, Myers closed her acceptance speech with these words:

“I’m proud to have dragged fifteen hundred meters of telephone wire across the Kazakhstan desert to start our camera on the Russian launch pad. I’m proud to have swum with magnificent sixteen-foot manta rays. To have dropped a twenty-five-pound roll of release print on my foot at three a.m. In the then-Soviet Union, to have taken three astronauts, who had been to the moon, shopping for their wives because they were afraid to leave the hotel alone. To have screened the Rolling Stones rough cut, in horrid black-and-white 35mm, on a lousy screen in Manhattan for Keith Richards: Keith, me, and a bottle of Jack Daniels. (Actually, there were other people there.) To have made so many treasured friends along the way. I would not change a bit of it and I thank the GSCA and all of you for honoring me with this award.”

Myers’ husband, artist and filmmaker Michael Myers, died in 2010. She is survived by her son, Jackson Myers, senior creative director at Imax Corporation, his wife Kate Hall, and their daughter; and by step-daughter Micki Myers, her husband Matthew Schmidt, and their two children.

The family says a celebration of her life will be held in the spring. The family requests donations in lieu of flowers be made to the Temmy Latner Centre for Palliative Care at Mount Sinai Hospital, and Sistering, a service agency for homeless women, both in Toronto.

Tribute screenings of two of Myers’ films, Hubble and A Beautiful Planet, have been added to the schedule of the GSCA’s Film Expo, to be held in March in Los Angeles.