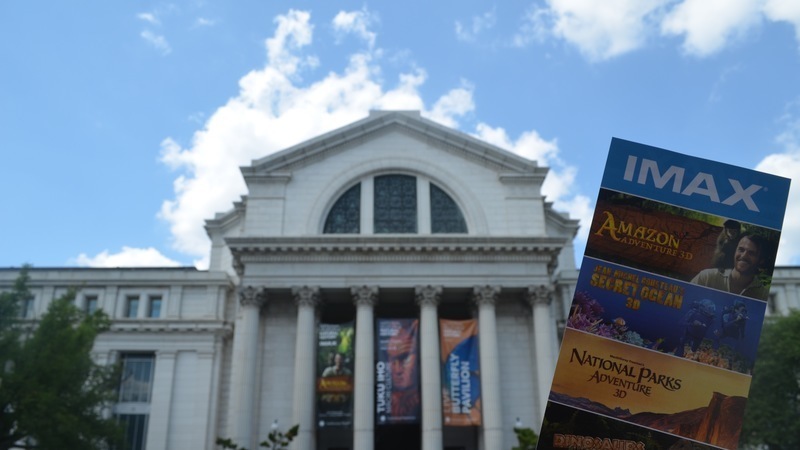 The Smithsonian’s Nation Museum of Natural History in Washington, DC.

Originally published in the September 2017 issue.

The Smithsonian Institution’s National Museum of Natural History (NMNH) in Washington, DC, is planning to close its 18-year-old Samuel C. Johnson IMAX Theater on Sept. 30, nominally to “create new space for public programming and accommodate a more spacious and sustainable restaurant,” according to a statement from the museum’s director, Dr. Kirk Johnson. The plan had not been announced publicly and only came to light in mid-July, when a group of distinguished giant-screen film producers, led by Jonathan Barker of SK Films and Taran Davies of Cosmic Picture, published an open letter calling for the decision to be delayed or reversed. (That letter, and the statement to LFX from NMNH, are reprinted in full below.)

Barker has appeared on radio and television shows in Washington to make his case, and at press time the group’s petition at Change.org had gathered more than 1,500 signatures. The group has since sent additional letters to the Smithsonian’s Board of Regents and to the Secretary of the Smithsonian, Dr. David Skorton. Several other editorials have protested its closing.

The move to close the theater is unprecedented and extremely puzzling to anyone familiar with the operation of GS theaters in museums. Failing museums have closed and taken their theaters with them, but demolishing a GS theater in a healthy museum is virtually unheard of. It also makes little sense to close an operating theater and revenue source in favor of a replacement for which there are no concrete plans and no funding in place, as appears to be the case here. (We asked NMNH specific questions about financial models, construction plans, and other details, but only received the statement in response.)

NMNH’s IMAX theater is part of the West Court project, built in 1999 at a cost of $45 million in a large open courtyard within the original 1910 museum building. The 80,000-square-foot (7,500-square-meter) center includes the 487-seat theater, the 800-seat restaurant, and an interactive Discovery Room on the top level.

With 7.1 million visitors in 2016, NMNH is the fourth most popular museum in the world. This level of visitation would seem to guarantee the success of any giant-screen theater; the 312,000 tickets reportedly sold in 2016 is significantly lower than would be expected.

That number is more than twice the average of 34 institutional GS theaters that reported their attendance to the Giant Screen Cinema Association in 2016, but only one theater is located in a museum more popular than NMNH. That one is the National Air and Space Museum (NASM), across the National Mall, which drew in 7.5 million visitors in 2016. Its Lockheed Martin IMAX Theater has been the world’s most popular for much of its 41-year existence. Although I don’t know its 2016 attendance number, when I managed it in the late 1980s and early 1990s, it routinely served over a million visitors, going as high as 1.5 million in some years.

That discrepancy might seem to support Johnson’s claim that declining attendance at NMNH’s theater justifies closing it. Of course, most institutional giant-screen theaters around the world have seen attendance drops over the last few years, for a variety of reasons that we have covered in LFX. And NMNH’s IMAX theater has some inherent obstacles to achieving the high ticket sales of its sister in NASM, the main one being that its location within the labyrinthine NMNH does not make it easy for visitors to find.

However, in an Aug. 18 letter to the Smithsonian’s Board of Regents, the filmmakers protesting the closure revealed that, contrary to the statements from NMNH, the box office reports they have received from the theater indicate that its attendance has gone up, not down, over the past three years, from 265,000 in 2014 to 285,000 in 2015 and over 310,000 in 2016. (The group has also made requests under the Freedom of Information Act for documents and e-mails relating to the closure of the theater and the expansion of the restaurant.)

Furthermore, several managers, consultants, and other experts I have spoken to about this story fully agree with the conclusion I have reached, as a former IMAX manager: even if attendance were falling, the solution would not be to close the theater, but to boost marketing efforts.

Instead, for reasons that are entirely unclear, museum management (which ultimately controls operation of the theater) appears to have acted to undermine, rather than support, the theater.

As I mentioned, the location of the IMAX theater is not obvious to visitors, the majority of whom enter through the Mall side of the building. For that reason, a satellite box office was installed in the Rotunda, the main entrance hall, shortly after the theater opened in 1999. And yet, on my most recent visit I was surprised to see that it had been removed, as had some of the signage promoting the theater. This can only have hurt ticket sales.

The rationales offered for closing the theater make no sense to anyone with theater management experience, either from a business or mission point of view. The museum director asserts that the theater runs “at barely 20% capacity,” while complaining that the current restaurant cannot handle demand, and that “lines often extend into the main hallway of the museum.” However, most GS theater managers recognize that, unlike attendance, “percent of capacity” is a statistic of dubious utility, since it can be raised or lowered at will by changing the number of shows on the schedule. Furthermore, no comparable capacity figure has been cited for the restaurant, which is undoubtedly mostly empty for most of the day.

With sales of over 300,000 tickets, plus concessions, gross revenue of NMNH’s theater must be in the vicinity of $3 million, based on reasonable assumptions. Net income is therefore probably well over $1 million a year. I think most GS managers and marketers would agree that, in a museum with 7 million visitors, those numbers could be increased substantially with little difficulty.

I have no idea about the current profitability of the restaurant, or how much it might potentially be increased in an expanded footprint. (I will note that food service typically has much lower profit margins than GS theaters.) The cost of the proposed renovations is estimated at $16 million, according to a Smithsonian spokesperson, although no RFP has yet been issued.

Furthermore, no consideration seems to have been given to the option of expanding the restaurant in a manner that doesn’t affect the theater. Barker and other observers point out that there seems to be plenty of space within the existing structure to do so.

On learning of the estimated cost of the project, Cosmic Picture’s Davies told LFX: “The American public should be gasping for air at the $16 million price tag to tear down and replace a perfectly viable and profitable IMAX theater at taxpayer expense. The plan to expand the cafeteria is not based on any independent analysis of demolition, construction, and operating costs, and it is likely the bill to taxpayers will be far higher. How many years will it take to recoup such a huge investment by selling more hot dogs and pizza to children?”

As for serving the mission, the museum director’s statement says the new construction will include “new space for public programming,” although he revealed no details about this space or how it would meet mission goals. Will it be able to provide informal science education to hundreds of thousands of people in the unique and memorable way that GS films do? Will it provide more than a million dollars of net annual revenue like the theater?

Another assertion in NMNH’s official statement is that “the Smithsonian still has two other IMAX theaters,” at NASM and in NASM’s Udvar Hazy Center at Dulles Airport. However, this argument is specious for several reasons, the main one being that NASM’s theater rightly fills its schedule with films related to its mission, and showing natural history films there would be inappropriate. A less well-known problem is that NASM is in the midst of a long-term revitalization that essentially involves rebuilding the entire museum from one end to the other. During each phase of the project, large sections of the building will be closed to the public. This means that, sometime in the next five years, NASM’s IMAX theater (and its Einstein Planetarium) will be closed for up to two years. If NMNH’s IMAX is demolished, that would leave the National Mall with no IMAX theaters for the first time since 1976.

The unavoidable conclusion is that closing NMNH’s theater would cost the museum and the Smithsonian money and reduce, not enhance, their ability to fulfill their mission. At the very least, a great many questions have not been answered.

Which raises the matter of transparency, and the fact that although the director claims that planning has been under way for five years, in all that time the museum made no public statements, nor did it solicit public opinion, about the project. Indeed, the plan was only acknowledged by the museum after the filmmakers’ open letter was published, a scant few weeks before the planned closure of the theater.

The Smithsonian is funded in part by U.S. taxpayers, and should consider public opinion in decisions that would deprive visitors of such a significant public asset. It does not behoove the institution to behave in this secretive and opaque fashion in matters of such import.

The Smithsonian and NMNH owe the American public more consideration and openness in this vital matter than has been evident so far. The filmmakers’ call to delay the closure and demolition of the theater, pending full disclosure and discussion of the project and its ramifications, is entirely justified and should be heeded.

For more information on the campaign to save the theater, visit www.saveourimax.org.

No openings at this time.