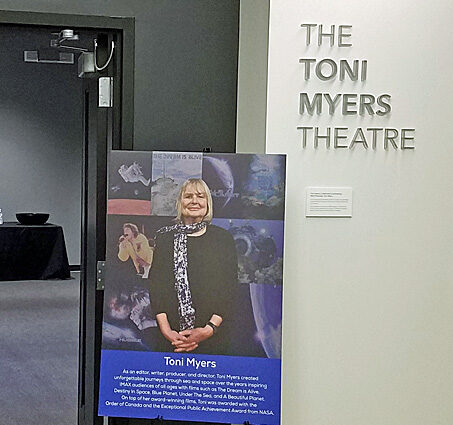 The theater at Imax Corp. headquarters in Toronto has been named for Toni Myers.

Originally published in the November 2019 issue of LF Examiner.

About 260 colleagues, friends, and family members attended a celebration of the life of GS filmmaker Toni Myers at the Canadian headquarters of Imax Corporation on Sunday, Sept. 22. The event was organized by Myers’ son Jackson Myers, who is senior creative director at Imax.

The afternoon began and ended in the facility’s 184-seat IMAX theater, which was officially named the Toni Myers IMAX Theatre shortly before the event. Jackson Myers introduced several speakers who memorialized his mother, including composers Maribeth Solomon and Micky Erbe, who scored a dozen giant-screen films spanning Myers’ entire career, from North of Superior in 1971 to A Beautiful Planet in 2016; astronaut Marsha Ivins, who appeared in or helped with several of the IMAX space films; and Greg Foster, who oversaw several of Myers’ films during his tenure as president of Imax Entertainment.

Several themes emerged in the speakers’ tributes to Myers: the excellence she embodied in her work and inspired in those she worked with, her attention to detail, her love of music and its influence on her work, and the love and respect she shared with everyone around her.

Erbe recalled that during a studio mixing session Myers might be working on a script or some other task on her ever-present MacBook, but would suddenly look up and say “Was that trombone note flat?” At the end of every recording session, in thanking the musicians and engineers, she made them all feel that “what they were contributing was indispensable to her” and the film.

On video, Mary Martin, a talent manager, record executive, and long-time friend of Myers (and Jackson’s god-mother), told of Myers helping her record a demo of a then-unknown Leonard Cohen in the bathtub of Martin’s Greenwich Village apartment in 1966.

Astronaut Marsha Ivins said that over the 25 years that IMAX cameras flew to space, “Toni wrangled 139 Type-A astronauts into being the actors, the directors, the producers, the cinematographers, the sound guys. And through all of that Toni was the glue. She had the ear, she had the eye, she had the mind, and most of all she had the heart to tell the story that has left this legacy of what we did in space. But probably the biggest gift that she gave all of us who trained with her and got to know her is that we got to call her friend.”

Greg Foster said “she charmed everyone in Hollywood she met, filmmakers like Chris [Nolan], A-list actors, heads of studios.” But she was always meticulously prepared for business meetings. When he and Myers went to pitch A Beautiful Planet to Alan Horn, head of Walt Disney Studios, she had a 20-minute presentation fully mapped out. Five minutes into it, Horn enthusiastically said, “I’m in!” Foster was ready to take yes for an answer and leave, “but Toni would have nothing to do with it! She said, ‘I have prepared this pitch, and I’m not leaving until I finish it.’ Alan repeated, ‘But Toni, I’m in.’ She said, ‘I’m not finished.’” So Horn let her finish and then greenlit the film. Foster pointed out that there is no one else in the world who has directed the stars who narrated Myers’ films: Tom Cruise, Johnny Depp, Leonardo DiCaprio, Jennifer Lawrence, Kate Winslett, Jim Carrey, and Leonard Nimoy. “And everyone of them adored her, respected her, and were honored to be in a Toni Myers movie.”

Jackson Myers credited retired Imax exec Jennifer Rae with helping fulfill his mother’s wish to spend the last few months of her life at home with friends and family by coordinating volunteers to help with the many tasks that needed to be done to free the family’s time. His voice choking with emotion, he spoke to her in the audience: “You were already a busy person, and you took on a 24/7 job. You took on and you absorbed so much so her family could spend quality time with her.” In addition to all that, Rae led the effort (with Imax co-founder Graeme Ferguson, his wife, Phyllis Ferguson, and others) to have Myers made an Officer of the Order of Canada, the country’s second-highest honor, a week before she died.

Jackson closed by thanking Graeme Ferguson for his friendship and mentoring of his mother. “We wouldn’t be here right now if it weren’t for you, literally.”

The presentation closed with a 17-minute reel of footage from Myers’ films assembled by Imax’s David and Patricia Keighley that included clips from North of Superior, The Dream Is Alive, Destiny in Space, Space Station 3D, Hubble 3D, A Beautiful Planet, and Rolling Stones at the Max.

A reception followed in the atrium of the Imax offices, the walls of which had been decorated with blowups of snapshots from Myers’ life, from infancy to the final days.

The afternoon concluded with screenings of North of Superior and A Beautiful Planet.

No openings at this time.